With thanks to Belinda Lanks, design editor of Businessweek.com.

You’ve been in a meeting that was too long, maybe as recently as this morning. You may have led one, or doodled cats throughout, or checked your e-mail under the table. And despite all the research on dwindling human attention spans, tomorrow will bring another. Steve Jobs famously tried to kill this feature of corporate life by keeping groups small. Occasionally, he would do this by telling the least important person to leave the room. Next came the standup meeting popularized by former Defense Secretary Donald Rumsfeld. These were meant to retire to-do lists quickly by keeping staff on their toes.

Jake Knapp, a design partner at Google Ventures —the tech company’s investing arm— is now evangelizing a new strategy. For his meetings, he relies on a device called the Time Timer, which has been used since 2000 in elementary schools to help kids with autism and ADHD stay on track. (Teachers often refer to it as the magic clock.) Basically a giant, 8-inch version of an old-school oven timer, it’s easy to set and read from far away. It has massive black numbers marking five-minute increments and an emergency-grade red disc that delineates the time remaining. Knapp first saw one in his son’s first-grade classroom and thought, “Oh, my God, this changes everything,” he says. “I figured what worked for small children would probably work well for CEOs, too.” 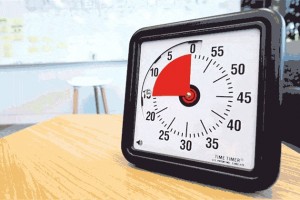 Soon after, he bought the tool for the five-day boot camps that Google Ventures runs with each startup it invests in. (Former campers have included Blue Bottle Coffee, About.me, and AngelList.) In these “design sprints,” the goal is to identify and fix the problems of any new product one by one in rapid succession. That’s where the timer proves useful: “It makes time tangible,” Knapp explains, “so it changes the way people think about it passing.” Typically, windbags realize they’re bogarting the room, while reserved types rush to say something before the timer hits zero and beeps loudly. This works no matter how short the meeting is—though 30 minutes is a good maximum—as long as attendees have a visible endpoint.

After graduating from the Google incubator, many chief executive officers have installed a Time Timer in their own offices. Brenden Mulligan, of the photo-sharing app Cluster, says part of the appeal is its analog concreteness “in a world where everyone, including us, is constantly trying to digitize everything.” Smartphones have stopwatches, of course, but he says they don’t offer the same benefit, because they can be dismissed with a finger swipe. Mike Salguero, CEO of CustomMade Ventures, an online retailer for locally made products, likes his Time Timer enough that he’s started using it for mundane independent tasks, confining e-mailing and eating lunch to discrete half-hour chunks.

At first, a countdown clock typically elicits laughs. Knapp uses the skepticism: “I always say in the beginning, ‘Hey, this is going to be really awkward. I have this timer, and if you’re talking when I reach for it, it’s going to be weird.’ ” After some nervous chuckles, employees generally embrace it, especially when they realize they’re spending fewer hours in the conference room.

But what they gain in efficiency might be lost in the quality of ideas. “When you rely too heavily on a device like a timer, you discourage people from raising minority opinions and maybe challenging the majority,” says Adam Grant, a Wharton professor who’s studied workplace behavior. And while visualizing time has its benefits, making it audible usually does not: A 2013 study at the University of Minnesota at Rochester found that people were more stressed playing the wordy board game Scattergories when the timer they used made a ticking sound.

The Time Timer is silent. Knapp still cautions against bringing it to every meeting. For employees already feeling pressure, it can seem like an instrument of torture. “I wouldn’t want to conduct a job interview with a Time Timer,” he says.